What is that?
What is a “Butterlecker”? 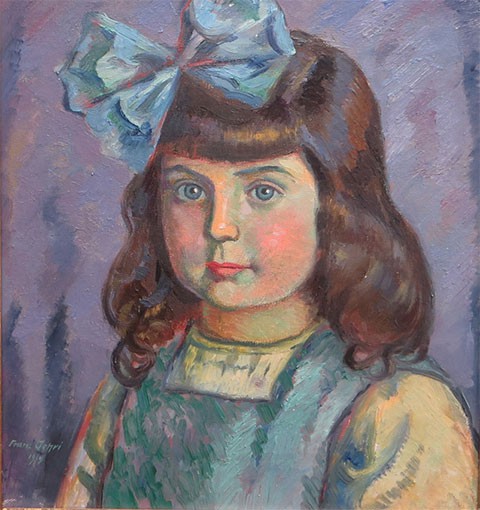 A “BUTTERLECKER” IS AN OLD GERMAN WORD DESIGNATING A LARGE HAIR RIBBON AS WORN BY LITTLE GIRLS IN NORTHERN GERMANY UP UNTIL THE MID-1950S.

The term “Butterlecker” derives from “Botterlecker” (literally: butter licker), a now barely used word in Plattdeutsch (Low German), a north German dialect, for butterfly, whose shape is imitated in the bows of this hair ornament.

The High German name for butterfly, “Schmetterling”, is presumed to have come from the word “schmetten”, which in East Middle German – as in the Austrian dialect – means cream. Likewise the Plattdeutsch term “Botterlicker” and the English word “butterfly” are derived from the same root.

The oil painting “Mädchen mit dem Butterlecker” (Girl with the butterfly) was painted in 1919 by the Swiss artist Franz Wilhelm Gehri (1882–1960).

What is a “lectern”? 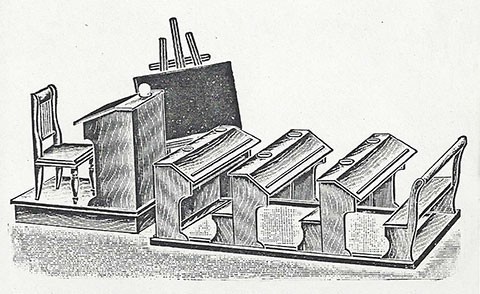 SINCE THE BEGINNINGS OF MIDDLE-CLASS EDUCATION IN THE EIGHTEENTH CENTURY, SCHOOL CLASSROOMS WERE FURNISHED WITH A LECTERN FOR THE TEACHER, SCHOOL DESKS FOR THE PUPILS AND A BLACKBOARD.

From the late eighteenth century onwards, school classrooms provided the framework for the general education of children from all class backgrounds. Part of the basic furnishings were school benches: similar to pews in churches, they provided seating for a number of children and, if more space was needed, could be moved closer together.

During the second half of the 19th century, the two-seater bench and desk was introduced, making it easier for pupils to leave their seats and step forward to write on the blackboard, for instance.

The illustrations of dolls’ school desks from a toy catalogue from 1924 were proportional reproductions of the original school furniture, with the seating adjoined to the desk as a fixed unit. Facing the rows of desks was a lectern – the old word for the teacher’s desk – on a raised dais and a blackboard (in Germany usually painted green) which could be written on in chalk and easily wiped clean with a sponge. 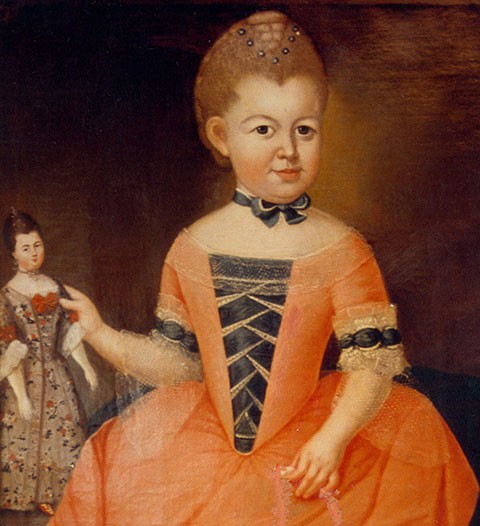 ALSO KNOWN AS A CORSET, STAYS WERE A STIFFENED UNDERGARMENT ALREADY IN USE BY THE MID-SIXTEENTH CENTURY. THE TYRANNY OF FASHION COERCED EVEN YOUNG UPPER-CLASS GIRLS FROM EARLY CHILDHOOD ON INTO TIGHT STAYS AND SCHOOLED THEM IN VANITY.

Children’s clothing of the kind we take for granted today is an invention of the modern era. In earlier centuries it was common to dress children like diminutive adults once they were beyond infancy. This practice was at times especially painful for girls. From the 17th century onwards, they, like their mothers, had to wear corsets stiffened with inserted fishbone or wooden slats to create a narrower waist. Children were frequently laced up very tightly and the corsets were reinforced with metal rods, since it was generally hoped that this would have a “positive” influence on the body’s growth. Upper-class children were also made to wear floor-length, low-cut dresses in tune with the fashions of the time and often modelled on their mothers’ clothes. Accompanying this would be corresponding accessories such as high-heeled shoes, jewellery and powdered wigs – as worn also by the just three-year-old girl in this picture.

What is a “coffee roaster”? 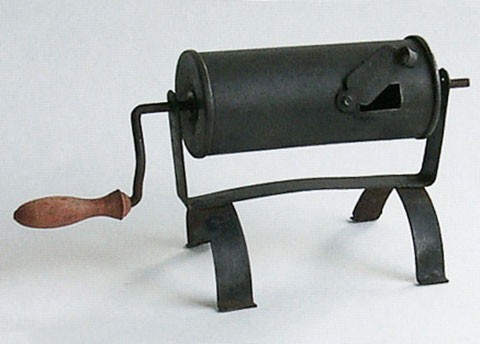 HAND-OPERATED COFFEE ROASTERS ARE KITCHEN GADGETS FORMERLY USED TO ROAST GREEN COFFEE BEANS UNTIL THEY WERE BROWNED. MOST ROASTERS WERE PLACED OVER THE OPENING ON TOP OF THE STOVE.

In the nineteenth century, most households still roasted their own coffee; pre-roasted coffee beans did not become available until about 1900. The untreated bean was – depending on the country of origin – yellowish, grey or green. Since green beans were considered to have the highest quality, the other varieties were often dyed green with copper vitriol, which is why they needed to be repeatedly and thoroughly washed before roasting. After the beans had been dried they were put in the coffee roaster, a fireproof container that was usually placed over the fire and evenly rotated with the aid of a wooden handle. During roasting the container could be sealed airtight, preventing the flavourings from escaping. Coffee was introduced and drunk in Germany from the early eighteenth century onwards. Initially a privilege of the wealthy, coffee later grew to become a commonplace token of bourgeois culture. Coffee houses sprung up all over Europe and became important meeting-places for the educated middle classes.

IN THIS NEW Q&A GAME WE WILL BE HIGHLIGHTING AND EXPLAINING THESE AND A NUMBER OF OTHER NOW OBSOLETE OBJECTS IN THE MUSEUM. IT’S ABOUT THE FUN OF EXPLORING QUIRKY, PRETTY, UNIQUE AND VALUABLE THINGS FROM THE PAST.

For the last thirty years, in her world of little things Elke Dröscher has been showing what once existed on a larger scale. In the peep box world of the dolls’ houses you can recognise miniature versions of objects that in former times would have been found in a middle-class household. Each detail of the furnishings was made absolutely true to the original because, over hundreds of years, dolls, their houses and their shops were used as a form of instruction. A glimpse inside the diminutive environments of antique dolls’ houses opens up a path to discovery – representing the settings of historic lifestyles with a degree of vividness that would be hard to equal in museum facsimiles or modern simulations. The charm and historical value of all the dolls’ houses, regardless of the era or style in which they were made, is captured in the richness of materials and attention to detail of these now long since “obsolete” utensils. Since the profane objects of everyday life are seldom kept they soon vanish from our collective memory. So the hundreds of finely detailed tiny objects preserved in the museum offer visitors a rare chance to gain a lively first-hand feeling for experience of history.

Curious for more questions and answers? Then come and visit us at the museum!